Testing the health of the Battery Bank

Battery banks are used to ensure the uninterrupted operation of several critical systems, which directly or indirectly affect our daily lives. Supervisory system of power distribution substations and base stations are examples of places where the use of battery banks is essential to maintain the uninterrupted operation of the systems. Lead Acid batteries are used as elements of battery banks capable of supplying the necessary power when the supply of the conventional power grid occurs.

The most common and effective test to measure the “health” of the battery bank is to perform a capacity test following the current regulations. Briefly, it consists of disconnecting the conventional power grid and checking how long the battery bank supports operate by providing the power required for the system in question. This time must be in accordance with the design specifications and the progressive reduction of the time in which the battery bank gives energy support to the load is an obvious sign that it already has elements (batteries) with problems and / or in the term of its useful life.

The capacity test has its clear effectiveness in the maintenance routines but also offers a risk in that it can not be guaranteed that the electrical network is operating normally during and mainly after the test during the time necessary for the complete recharge of the bank battery system, leaving the consumer system vulnerable.

Methodologies that evaluate the state of degradation of the batteries, in a short period of time, without the need to disconnect them from the consumer equipment, thus not contributing to their premature aging and also that is affordable, has been gaining strength. One of the methodologies that has been much researched is the evaluation of the internal resistance of the battery.

In battery systems, the impedance indicates the general state of the batteries and most importantly, without stressing the entire system and the batteries themselves.

The impedance is determined by applying an AC current signal to one of the battery terminals by measuring the AC voltage drop on the other battery terminal and then calculating the impedance using Ohm’s Law. As the battery ages, the internal impedance increases. By measuring the impedance, it is possible to determine the condition of the internal components in a non-invasive manner and without the stresses that the capacity test provides.

The Wens 900 battery analyzer will perform the impedance test and give you a report with battery impedance, temperature and voltage. 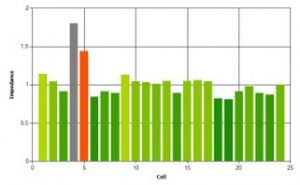 Talk to a specialist Know our solutions